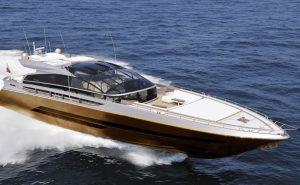 The most luxurious yachts in the world are true floating palaces. They have helipads, multiple swimming pools, dance floors, cinema halls, bars, and beach clubs, as well as a slew of fabulous amenities fit for the billionaires who own these works of art. Besides, the owners fly their choppers to board them in style.

Each yacht is an elegant, strikingly beautiful vessel powered by some of the best engines in the world that slice through the seas with no occupant feeling even the slightest discomfort. The materials used to construct the yachts are of the highest quality, a guarantee that their finesse is worth the high prices.

What are the 3 most expensive yachts in the world?

Welcome to an encounter with some of the most luxurious yachts in the world and the amazing amenities they provide, from helipads to opulent beach clubs. 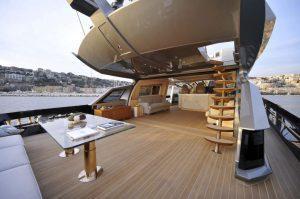 At around $4.8 billion, History Supreme is the most expensive superyacht in the world; not by size or mass, but by glory.

This magnificent achievement is 100 feet long and made of 10,000 kilograms of solid gold and platinum.

Pricey History Supreme was designed by world-renowned UK luxury designer Stuart Hughes, took more than three years to complete, and was purchased by Robert Kuok, Malaysia’s richest man with a net worth of $10.8 billion, according to Forbes.

The solid gold and platinum used in the construction of the 100-foot floating palace adorn the vessel from its base, which is coated in a thin layer of solid gold, to the dining area, deck, railings, staircases, and anchor.

The master bedroom is one of the most impressive features of this magnificent luxury yacht. It has a meteorite rock wall feature and a statue made from genuine Tyrannosaurus Rex bones! 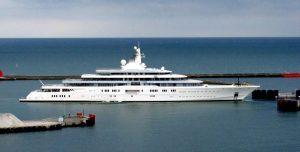 Roman Abramovich, a Russian billionaire owns Eclipse, the world’s second most expensive sea cruiser, which is valued at around $1.5 billion.

Eclipse was built by Blohm and Voss of Hamburg and measures 536 feet long, making it the world’s second-largest.

The Eclipse’s massive size allows for many extravagant features such as 24 guest cabins, two swimming pools, several hot tubs, and a disco hall, not to mention two helicopter pads, three launch boats, and a mini-submarine capable of submerging up to 50 meters underwater.

The 162.5m-long Eclipse has surpassed the 162m-long motor yacht Dubai owned by Sheikh Mohammed bin Rashid Al Maktoum, the Prime Minister and Vice President of the United Arab Emirates and the ruler of Dubai.

Furthermore, the Russian billionaire did not compromise on the quality of his cruise liner. In his master bedroom, he installed a private defense system that included missile detection sensors, intruder alarms, armour plating, and bulletproof windows.

Additionally, this one-of-a-kind vessel has an anti-paparazzi shield comprised of lasers that sweep the surrounding areas. When lurking professional photographers are detected, a light is shone directly on the camera to prevent a photograph from being taken.

Also, the floating luxury requires a complete 70-member crew to maintain. The yacht has nine decks in total, with the top level reserved for the garage and helicopters. On level eight, there is a bar, a pool, and a sundeck. A pool, an atrium, and an open deck are all on level seven. 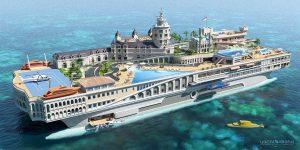 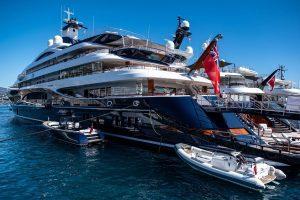 The Streets of Monaco, the third yacht on this list but one of the greatest and most expensive in the world, is a 509-foot mega yacht decorated with replicas of some of Monte Carlo’s and Monaco’s famous scenery.

With its white colonnades, arches, and castle-like designs, the exterior of the boat is a reflection of Monaco’s imposing streets.

Inside, visitors can access the ship’s spa area from the pool area via a marble staircase. This yacht design, a marvel of contemporary engineering, is intended for owners who want to make a splash as they enter any harbor.

In addition to that, the luxury yacht has a go-kart circuit, three pools, a helipad, seven guest suites, a mini waterfall, and a restaurant with an amazing underwater view.

More so, the Streets of Monaco can comfortably accommodate up to 16 passengers and a crew of 70, providing each guest onboard with exceptional, individualised service while cruising at a leisurely 15 mph.

However, at a breathtaking $1 billion, buying this yacht is akin to buying a floating estate, complete with a dance hall, cosy living quarters measuring thousands of square feet, and sundecks with private Jacuzzis, among other amenities.

Why you should own your yacht

I hope your voyage on each of the three most expensive yachts in the world was pleasurable.
Nevertheless, investing in a yacht will inspire you to embark on family vacations and create treasured memories. By doing this, you can teach your kids or grandchildren a few sailing basics and spark their interest in the art.

Additionally, it provides almost all the amenities you could possibly need while on vacation as well as presents you with a variety of opportunities and events from which you can learn a wide range of things.

The most exciting and reasonably priced way to travel and spend time with your loved ones is probably on a yacht, but how cool would it be to cruise the world for a few months each year in one of these fascinating vessels?