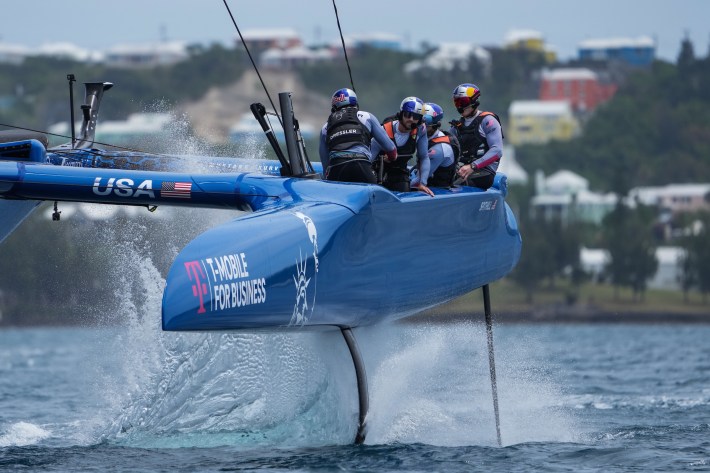 The Lakefront Will Become A Stadium Of Its Own This Weekend

CHICAGO — Catamarans that speed across the water so quickly they appear to hover will race Downtown and on the Near South Side this weekend.

The Sail Grand Prix, known as SailGP, runs Saturday and Sunday in Lake Michigan, with a race village at Navy Pier. The race will feature nine F50 hydro-foiling catamaran race boats captained by teams from across the world.

The boats go more than 60 mph as they cut through the water, taking tight turns as the sailors race for the trophy. The boats do not have engines, as they’re powered by the sailors and a battery that runs for about four hours to control the technology on the catamarans.

The team members are tethered to their boats, as the catamarans could capsize. Each F50 is followed by a chase boat with a safety team, including a Navy-Seal-level diver, spare oxygen tanks, knives and the team’s coach.

The boats are outfitted with 5G technology to collect data and video about the sail, which is shared with each team. It’s part of a process unique to SailGP.

“When we come to shore, we look at the data analysis and really delve into it to try and understand what worked and what didn’t work,” said U.S. team athlete Jimmy Spithill. “The best thing about it is everything’s open. We can see everyone’s data, the times, the different camera angles, the live . … We can go to the data and see why are they faster than us and how can we improve what we’re doing.”

That means the race is based on physical ability on the boats rather than technical tricks. The process also allows new teams to get involved and get up to speed right away on the racing basics. In addition to the data, new teams can use a simulator to learn how the boats work before hitting the water.

“It’s a mockup of the boat,” said Swiss team athlete Sébastien Schneiter. “They cut the back of the hull and put it on hydraulics in front of a screen, and you can practice. It’s quite different than what you feel on the water; it’s more just learning how the boat works.”

The Swiss team is the newest team to hit the race circuit. Every person on the team is new to the sport, though not to sailing in general — Schneiter has been sailing since he was a child. But SailGP is different, he said.

“It’s a very unique feeling,” Scheiter said. “We tried to prepare for it as much as we could, but there are no boats close to what these boats are in terms of speed and technology. You feel a lot of responsibility for the crew, but when you work together well, it’s quite rewarding because they’re really hard boats to sail. When you can get it right, it’s a very pleasing feeling.”

SailGP is committed to creating a sustainable race environment. At the tech base — think pit row, but for boats — in the south parking lot of Soldier Field, no single-use plastics are allowed. The teams are required to work with sustainability partners throughout the year to ensure everything they do is Earth-friendly.

At the end of the race, two trophies are handed out: one for the winner of the race, and another for the best sustainability efforts.

SailGP has also started a program called the Women’s Pathway Program to get more women involved in the male-dominated sport, and it requires each team to have a woman on board. As part of diversity and equity initiatives, Sail GP has a program called Inspire. It brings out diverse groups of young people from each city it hosts a race in to involve them in educational activities and introduce them to the sport. In Chicago, 350 youths ages 9-23 are participating.

During training for the race, the Inspire groups get out on the water, as well — enjoying the stunning racecourse Chicago has to offer the official SailGP teams.

“Chicago’s one of the coolest cities in the world,” Spithill said. “It has awesome teams and stadiums. But one stadium sports fans haven’t used enough is the lakefront. … People will be blown away by what they see.”

Click here to support Block Club with a tax-deductible donation.

Thanks for subscribing to Block Club Chicago, an independent, 501(c)(3), journalist-run newsroom. Every dime we make funds reporting from Chicago’s neighborhoods. Click here to support Block Club with a tax-deductible donation.

Listen to “It’s All Good: A Block Club Chicago Podcast”: